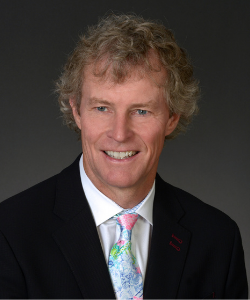 Each year, Western Engineering presents the L.S. Lauchland Engineering Alumni Medal to a worthy alum based on their outstanding contributions to the engineering profession, business leadership, and community.

“I am very honoured and excited to be selected as this year’s recipient of the L. S. Lauchland Alumni Medal,” said Hall. “I know there have been many worthy recipients before me, and I am humbled to be included in the company of so many great Western engineers.”

As a second-generation owner of Autotube, a family business located in Strathroy, Ontario, Hall has committed the past 35 years of his career to streamlining his business operations, and he has been instrumental in Autotube’s innovative success and international sales growth. His passion for engineering, innovation, manufacturing, and business is reflected in his daily work and personal life, with all four of his children choosing to complete engineering and HBA degrees at Western.

“My dad, an aeronautical engineer, encouraged me to enter engineering, and I have been forever grateful for that sound advice,” said Hall. “I think engineering is one of the most well-rounded educations available and a springboard to so many other pursuits. I use my engineering skills in all aspects of my job and in my role as a leader.”

Starting as a machine operator, Hall has done nearly every job at Autotube, and was ultimately appointed president after completing his university education. With Hall’s shift to a leadership role, he implemented a lean-manufacturing culture to drive engineering innovation and process improvements, team-building initiatives, and waste-reduction techniques.

Additionally, by investing in an automation team, Hall introduced robotics and automation into many processes at Autotube. By doing so, he managed to reduce costs while still maintaining competitive pricing, all of which resulted in the expansion of the business to a second location.

The company has grown from a small, family-owned business to a two-facility manufacturing operation, supplying 160 customer locations in 16 countries around the world.

In addition to serving as a leader in the engineering profession, Hall is an active leader in his community. He has been involved in various charitable organizations, with roles on several boards of directors, including past president of the Young Presidents Organization, Great Lakes Chapter, which recognizes extraordinary leaders who have achieved significant success at a young age.

Hall has been involved in numerous children’s charities. He was a director on the Board of the Roar for the Floor campaign, which assisted one of London’s local high schools in raising money for a suspended wooden gym floor, the only high school in the London area without one. Hall was also on the Board of Kids Kicking Cancer, an organization which helps children and families battling cancer and other childhood illnesses. Through the use of martial arts techniques, kids are taught to focus on controlling their pain, which empowers them and gives them a sense of control while undergoing many treatments and surgeries.

“It gives me great satisfaction to be in a position to give back to the communities in which I work and live,” said Hall. “My family and my business focus on young adult and children’s charities as it has always been our goal to assist young people so that they can continue to learn valuable skills and develop into productive and responsible adults.”

“I think these clubs are invaluable for teaching real-world engineering as well as helping to develop skills for working in a team environment,” says Hall.

Western Engineering congratulates Peter Hall on receiving the well-deserved 2021 L.S. Lauchland Engineering Alumni Medal, and we extend a sincere thank you for his outstanding contributions to the engineering profession, to business leadership, and to his community.

View the full list of past Lauchland Medal recipients.