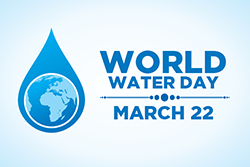 “Climate change is resulting in extreme weather and putting more pressure on all of us, but do we see the link between climate change and changes to the water cycle? Water is the most valuable asset we have,” says Slobodan Simonovic, Professor in Civil Engineering and Director of Engineering Works at the Institute for Catastrophic Loss Reduction.

This year’s theme for World Water Day is Nature Based Solutions (NBS). Restoring forests, grasslands and natural wetlands, reconnecting rivers to floodplains, and creating buffers of vegetation along water courses are all examples of NBS that help the management of water availability and quality. Most NBS, including in urban landscapes, essentially involve the management of vegetation, soils and wetlands, including rivers and lakes.

“NBS are not a panacea to the critical water-related challenges we face as the global population grows, but they can provide innovative and cost-effective options for supplementing insufficient or ageing water infrastructure,” says Simonovic.

In order to help us gain a better understanding of the resource on which we all depend, Simonovic and his team of researchers provided some facts about water and its worldwide usage.

For more information on water research being done at Western Engineering, visit eng.uwo.ca/waterengineering.