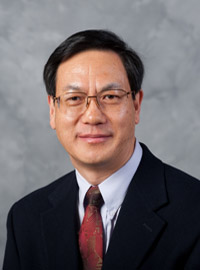 Wang’s publications have been cited over 123,000 times (SCI data base), and he’s delivered over 900 talks at international and national conferences as well as universities and research institutes worldwide.

For his lecture, “From Maxwell’s displacement current to nanogenerator driven self-powered sensors and systems”, Wang covered the creation and application of nanogenerators – a technology that converts mechanical and thermal energy to generate electricity. The key components inside a nanogenerator are nanowires made from a piezoelectric material that can generate an electric current just by being bent or stressed. Wang coined and pioneered the field of piezotronics and piezo-phototronics by introducing a piezoelectric potential gated charge transport process in fabricating new electronic and optoelectronic devices.

Wang and his team have made significant achievements in developing nanogenerators over the last decade. His research on self-powered nano-systems has inspired the worldwide effort in academia and industry to study energy for micro-nano-systems, which hold substantial importance for multiple industries including medicine and technology.

For example, medical professionals could use nanogenerators to regulate and monitor patients’ health, using them to power implanted devices such as pacemakers. These self-powered nano-systems could also be used to charge electronic devices like cellphones.

Western Engineering was proud to welcome Wang as part of its Distinguished Lecture series and looks forward to witnessing the continued development and impact of self-powered nano-systems.