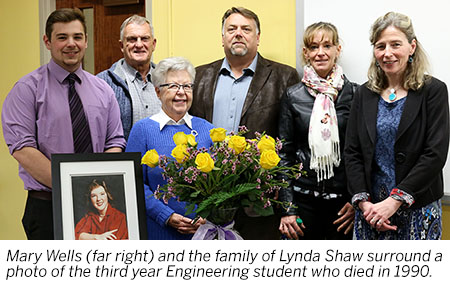 On March 22, 2018, Western Engineering held its 27th annual Lynda Shaw Memorial Lecture to honour the life of Lynda Shaw, a third-year mechanical engineering student at Western who was murdered near Highway 401 in 1990.

Mary Wells, Dean, College of Engineering and Physical Sciences at the University of Guelph, and outgoing Chair of the Ontario Network for Women in Engineering (ONWiE), joined Western Engineering as this year’s distinguished speaker.

Wells discussed national efforts in closing the engineering gender gap and reflected on the progressive work being done through ONWiE, since its inception in 2005, to ensure diversity within the engineering industry. Wells opened her lecture by introducing Valerie Davidson, founder of ONWiE and former NSERC Chair for Women in Engineering and Science.

“Valerie made it her mandate to come up with a way that people could collaborate to make progress,” said Wells.  “At that time, we didn’t have the tidal wave of interest in diversity for women in engineering that we do today. Valerie was really going against the tide.”

“Anything we can do to promote the intersection between engineering and health will attract girls to pursue engineering and see it as a humanizing profession,” said Wells.

“We assume people are what we see them do. Implicit associations are learned from seeing different groups of people unevenly divided into different roles. For example, when we see more engineers who are men, we form a link of ‘engineer equals male’ more than female.”

The key ONWiE strategies to counter this gender bias within engineering are to provide strong role models for girls hoping to pursue engineering, and to engage parents, teachers and leaders. ONWiE focuses much of its efforts on engaging parents, as they are such a strong influential force in their children’s’ lives. Surveys from ONWiE events indicated that 2/3 of parents will encourage their daughters to pursue engineering.

Wells commended ONWiE’s work in staying true to its mandate to increase STEM exposure to girls in elementary and high schools, ensure better informed parents, implement more programs that provide role models, and humanize engineering by emphasizing its benefit to society. From 2005 to 2018, ONWiE outreach programs, such as Girl Guides Badge Day, Go ENG Girl and Go CODE Girl, have reached over 30,000 girls and parents nationwide.

As Wells’ five-year term as ONWiE Chair comes to an end in July 2018, Kim Jones, Associate Professor in Chemical Engineering at McMaster University, will take on the leadership role as ONWiE’s new Chair.

“We’re in an exciting time of change, and I think it’s a great time for Kim to be taking over,” said Wells. “We can all do our part to press for progress and change our gender equity in engineering.”

For more information on ONWiE and its programs, visit onwie.ca.