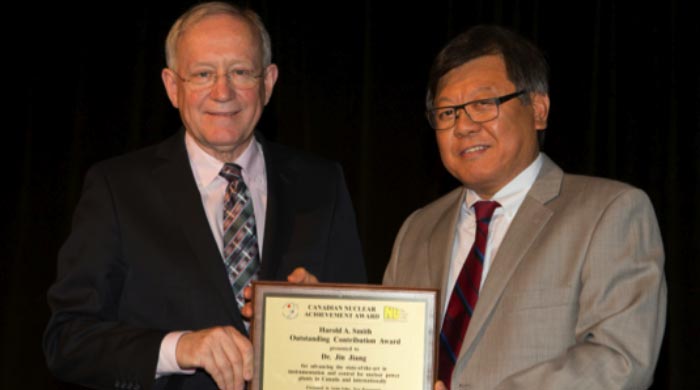 NSERC/UNENE Senior Industrial Research Chair (IRC) Jin Jiang of Western’s Department of Electrical and Computer Engineering has been presented with the 2015 Canadian Nuclear Achievement Award – ‘Harold A. Smith Outstanding Contribution Award’ – for his contributions in instrumentation and control for nuclear power plants in Canada and internationally.

“This award means a lot to me, and I feel very honoured” said Jiang. “There is nothing more gratifying to learn that your work has been recognized by your peers, and the research that we have done in the past 14 years has made some positive impact in nuclear industries in Canada and internationally.”

Jiang, a fellow of The Canadian Academy of Engineering, is an internationally recognized expert on fault-tolerant control, distributed power generation of renewable energy resources, and instrumentation and control for nuclear power plants. He has made significant contributions to engineering in many different ways. His research has resulted in a clear understanding between available redundancies and degree of fault-tolerance, several new energy management and control strategies for microgrids involving renewable energy resources, and innovative approaches to instrumentation and control to improve safety and efficiency for nuclear power plants. He has published extensively in the above three areas and his work has received over 5000 citations by others.

In his acceptance speech, Jiang acknowledged those who made important contributions in his research programs as an NSERC/UNENE IRC. ‘This is indeed is a team award.’

Visit cna.ca/ and cns-snc.ca/ for more information on these organizations.