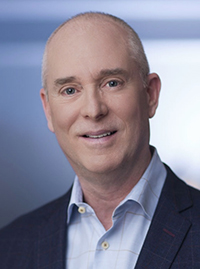 We are pleased to announce that Brian J. Bonnick will be the 2017 recipient of the Lauchland Engineering Alumni Medal.

“We are honoured to present Brian with this prestigious award,” said Andrew Hrymak, Dean of Western Engineering. “Brian is a most deserving recipient of this recognition for his accomplishments and leadership in the field of engineering.”

For the last seventeen years, Bonnick has been at IMAX Corporation, the Canadian theatre company which designs and manufactures IMAX cameras and projection systems. At IMAX, Bonnick and a team of dedicated engineers and technicians design the world’s highest resolution cameras as well as working with film development, production, post production and distribution to IMAX affiliated theatres worldwide.

“In my early days, I sucked up all I could from manufacturing, electrical and industrial. I learned about each of the different trades,” said Bonnick. “I learned how to be able to relate R&D to manufacturing and to service.  I gained an appreciation for all aspects of the field and I learned that engineering is much broader than I thought.”

That experience and knowledge led him to IMAX, the leader in innovative entertainment technology.  At present, the IMAX theatre network consists of 1,102 theatres in 69 countries around the world.

“At IMAX, we’re creating something that is completely immersive.  We take an image that looks okay and turn it into something that pops off the screen,” explained Bonnick. “We’re not saving lives, but we are bringing joy to people.”

Throughout his career, Bonnick has been a longtime champion of Western Engineering and its Career Services programs through student work opportunities at IMAX.  He has been a guest speaker within the Faculty, presenting IMAX to young Electrical and Computer Engineering students as an exciting and challenging career opportunity. He also is a supporter of the Western Engineering Student Endowment Laboratory (WESEL) Fund.

Bonnick also finds time to serve as a volunteer and mentor to multiple high school students participating in North American robotics competitions, which encourage youth to pursue careers in Engineering.

Bonnick cites a passion for your craft to be one of the essentials for success.  He recalls developing that passion as a young child of seven when he decided to slice through a plastic electrical cord with a pair of scissors. “It left a great big mark on the scissors and I blew a fuse,” he recalled.  “I was fascinated.  And I’m still fascinated.”

Now, he has the pleasure of seeing that passion develop in the young adults he mentors, the students who attend his lectures and in the young graduates who work with him on IMAX’s revolutionary technology.

Bonnick is thrilled to be accepting the 2017 Lauchland Engineering Alumni Medal, but credits  others for his success.  “It’s a wonderful honour and one that I’m sharing with every engineer that I’ve come across in my career,” he explained. ““My successes are determined by the people who work with me. It’s a very humbling thing to receive.”

Bonnick will receive the 2017 Lauchland Engineering Alumni Medal at a reception on October 21 at the London Club during Western’s Homecoming Weekend.


The L.S. Lauchland Engineering Alumni Medal is a prestigious award established to mark the retirement of Professor Stuart Lauchland, founding member of the Department of Engineering Science at Western and Past President of APEO. The medal is awarded to a graduate of Engineering from Western on the basis of their outstanding contributions to Canadian life in areas of  the engineering profession, business leadership and community involvement. Since its inception, the medal has been awarded to 28 recipients. View full list here.