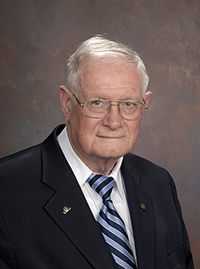 What advice would you offer an incoming Engineering student?

Unless you have a special reason, your choice of the engineering discipline that you study is not particularly important. It is not uncommon for engineering graduates today to work for five or six different employers during their careers and to have to work in disciplines in which they were not trained. Opportunities will be provided to learn what you need to know. When I graduated, I felt that I was disadvantaged with respect to the graduates of Queen’s University and the University of Toronto because I had no machine shop experience but within six months, I was giving instructions to the machinists at Canadian General Electric.

As far as it is possible for you to do so, take good notes and keep up with your studies. If you have to “cram” to pass the final examination, you should ask yourself whether or not you have really mastered the material that was presented in the course. It could turn out that the subject addresses exactly what you need to know in the position in which you are employed and without a proper understanding of the material, you will have to learn the material on your own.

Have an open mind and be curious. It is important that you understand the material that the instructor is presenting and the examples that he/she is working in order to illustrate the lectures but it is more important for you to understand the fundamentals underlying the subject being taught. It is highly unlikely that your employer will want you to solve a problem exactly like the one in the textbook. You will be employed to solve original problems relevant to your employment.

In my opinion, the construction of the Canadian Pacific Railway line that united the country was the greatest Canadian engineering accomplishment. It is difficult to image the enormity of the project and the difficulties that were overcome more than one hundred years later. However, the creation of the hydro electric power generation and distribution system in Ontario is a close second because it enabled the province to establish itself as the center of industrial activity.

How did your Engineering degree launch your success?

My Bachelor of Engineering Science degree afforded me employment in the Civilian Atomic Power Department of Canadian General Electric. My experience working in the Heat Transfer and Thermodynamics Research Laboratory resulted in an abiding interest in engineering research and led me to seek Masters and Doctoral degrees in the subject. When the opportunity presented itself, I was appointed to the faculty of McMaster University, resulting in my career as a professor of Mechanical Engineering which continues to the present time.